Home About Us History Past
RO | EN 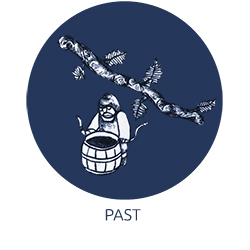 Tales usually start with “Once upon a time…” For the Oprişor Winery, the word “once” has both a documentary side and a reflexive note. To look back is not only a simple glance thrown behind, but a proud return in time meant to reveal people the pedestal on which we raise concepts and values.

I.C. Filitti’s writings are among the first scripts about the lands Oprişor Winery is placed on, as far as the richness of soils favourable to grapevine cultivation and to production of high-quality wines is concerned. The mention, since the 15th c., of Oltenian boyars’ estates on the Drincea Valley (among them, Neagoe of Strehaia) is continued, after 1688, by [Prince] Constantin Brancovan’s interest for these lands, famous for the production of best-quality wines.

“[Constantin] Brancovan’s concern to perpetuate his followers’ inheritance on the large estates having brought him fabulous incomes made him issue, on the 13th of August 1708, a document stipulating he was giving his son, Matei [Matthew] Brancovan, the part of the estate that included the vineyards belonging to the villages on the Drincea Valley.” (Ion Danilescu, Monografia satului Drincea / Monography of the Drincea Village, Alma Publ. House, Galaţi, 2001)

A bridge over time, a different “boyar’s behaviour” makes Oprişor area’s special potential reveal its specific and richness which God has naturally endowed Oltenia with. The investment the German Reh Kendermann Company made on the left bank of the Drincea Valley, on the very vestiges of a winery built in the 70s, stood for a new identity beginning. The origins of the firm are related to Carl Reh family, who, in the 1920s, had built at Leiwen, on the Mosel Valley (S–W Germany), their first unit, one of the biggest and most modern wineries in the epoch. In the 90s, the Reh Kendermann Company became the most prestigious German wine exporter.

In August 1994, Carl Reh Trading Company set up in Romania, aiming to select Romanian wines for international market. In June 1997, the division, settled at Oprişor, made the decision to produce their own wines from the grapes cultivated at the time on the already existent Oltenian vine-estate plantations in the Mehedinţi area.

Carl Reh Trading, renamed Carl Reh Winery in 1998, continued their activity as a Romanian wine producer for the international market the German shareholder had set up.

In January 2000, Carl Reh Winery became the owner of the Oprişor Wine Cellar. Step by step, the hills and slopes making up Golul Drincei’s wine-growing “amphitheatre”, covering a surface of 250 hectares, were replanted with grapevine.

After years in which the whole wine produced at Oprişor had been directed exclusively towards the international market, we decided to offer it to Romanian consumers too. In spring 2001, Carl Reh Winery launched on Romanian market the first editions of the VAL DUNA and LA CETATE /AT THE CITADEL/ brands.

The year 2008 brought about an important change of identity. As the reputation of the Carl Reh Winery Company increased, it was high time for the CRAMA OPRIŞOR /OPRIŞOR WINERY/ brand to take possession of the inheritance and, in the spirit of a father–son relationship, to carry it on, developing it mostly toward Inmost Oltenia’s values.